What Social Engineers Can Learn from the Bobo Doll

As social engineers, it behooves us to have a deep understanding of why people take the actions that they do.  Although we’ll probably never have complete insight into another, the topic of today’s blog is observational learning. In short, observational learning is learning that takes place by watching someone else model behavior. This concept was demonstrated by a really interesting experiment conducted by psychologist Albert Bandura in 1961.  He found that kids imitated specific aggressive behavior demonstrated by adult models against a Bobo doll. 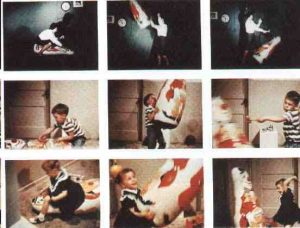 The link above outlines the specifics of the study; how the children were selected, what adult models were used, etc. Bottom line is that it was significant because it was a demonstration of how humans as organisms (along with some other animal species, as we’ve found) don’t have to be directly reinforced or punished to learn behaviors.

When you think of applications, this speaks volumes for human responses empathically as well as the argument for the need for greater compassion. All of us learn through observing the actions of others. Since we at SECOM stress the idea that we want people to feel better for having met us, one of the ways we can do that is by modeling positive behavior, even in situations in which we’re trying to get them to do something they shouldn’t. Empathy and compassion can be modeled and learned; consider this on your next engagement or even in real life.