Humans In The Wild – Jimmy Kimmel 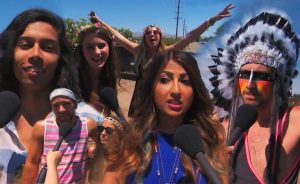 The same tendencies in humans that make us social creatures can also make us dishonest. Consider these people at the 2013 Coachella Music Festival that Jimmy Kimmel exposed on his late-night talk show. This video (embedded below) is a great example of our innate desire to be perceived by others as knowledgeable, even if we aren’t.

People constantly struggle with ego suspension. If someone is being asked about something they don’t know, individuals often feel better lying about their lack of knowledge than opening themselves up to potential criticism by professing ignorance. It clearly would have served these people to tell the truth since they were being set up, but the context exposed them.

The interviewer posed specific questions and raised the social stakes even higher than if only general opinions or ideas were being elicited. Obviously, it led to a lot of lying. In the minds of the concert-goers, they felt they needed to know the names of nonexistent bands because, if they did not, they admitted to knowing less than the interviewer. Adding to the pressure, the interview was being recorded. Sometimes people just cannot help themselves from acting or speaking or thinking a certain way and these tendencies create openings and opportunities for operators looking to exploit these vulnerabilities.

We discuss ego suspension in greater detail in Volume 48 of the SE Newsletter found on the SEORG website. In the meantime, with greater knowledge of the issue at hand, you will at least have a better chance of not becoming one of Kimmel’s jokes…