Most of us are familiar with the fact that Mark Zuckerberg, CEO of Facebook, is testifying in front of Congress this week regarding Facebook’s mishandling of user data. This hearing is being watched around the globe by corporations, governments, and users alike.

This nonverbal analysis will cover microexpressions and body language tells that may reveal what Mr. Zuckerberg is thinking.  A microexpression is a 1/25th of a second muscular response in the face to emotional stimuli. Microexpressions, as proven by Dr. Ekman’s years of research, transcend cultures, race, gender, and age. Body language tells will encompass hand gestures, breathing, and blink ratios as well as other body positions that might reveal emotional content.

Overall, Mr. Zuckerberg is professional, polite, and courteous. He calls each person “senator” or referred to them as “Mr.” or “Mrs. Chairman.”  He shows great patience and deals well with a barrage of attacks and questions for hours at a time. Many people are making comments about how scared he appears, and a few are trying to link that to lying. However, many viewers may be influenced by their own emotions on the topic.

Let’s be honest, if you were about to sit in front of Congress and have every senator grill you for 10 hours, do you think you would be a tad bit nervous?  I think I would.  Some of the scientific signs we can notice on Mr. Zuckerberg that shows he certainly is nervous are lip licking, lip compression, swallowing, long bouts of drinking, and a higher than normal blink rate.

Mr. Zuckerberg appears stoic, controlled, and honest. Yet, despite that, there are some tells suggesting he is uncomfortable that I am able to pick out while watching.

Notice a few quick things about this picture.  Senator Bill Nelson asks him if he feels he has an ethical obligation to notify 85 million Facebook users of a data breach. Before he answers, Mr. Zuckerberg flashes an extreme frown. This indicates discomfort, disagreement, and anxiety. But I want you to really look at Joel Kaplan, the Vice President of global policy at Facebook, behind Mr. Zuckerberg.  Right after Senator Nelson asks this question, Kaplan flashes contempt. A very strong emotion indeed.

At the same time, Mr. Zuckerberg does a very subtle left shoulder shrug, which is an indicator that he lacks confidence in the statement he is about to say. 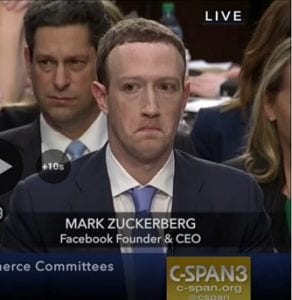 A series of senators really drill into Facebook’s terms of service, and it is at this time we see a lot of facial anxiety that looks like parts of the sadness facial expression on Mr. Zuckerberg. According to Dr. Ekman, in his book “Emotions Revealed,” when the mouth shows sadness without the existence of sadness in other parts of the face, this will generally denote disbelief or negation. (pg 104)

April 11th, Mr. Zuckerberg appears before The House Energy & Commerce Committee.  It is generally the same setup, where each representative will have a period of time to ask Mr. Zuckerberg a few questions about Facebook and data and privacy.

When Representative Greg Walden asks him why privacy was not more important to him as a CEO, Mr. Zuckerberg flashes contempt as seen in Fig 3. 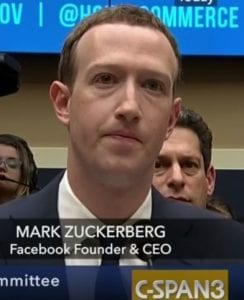 The contempt is very subtle, but when played in slow motion you can see it much more clearly.

What does this mean?

What does all of this mean? Do any of these nonverbal tells indicate that Mr. Zuckerberg was lying?

No, not at all. It is important to remember a few factors:

Now, don’t take all of this as support for Facebook. It is appalling to me that they breached 85 million people’s data and did not feel the need to inform us of even the potential damage to our Personally Identifiable Information (PII) and data. In today’s social media world, events like this are a good reminder that we are constantly giving permission to 3rd parties to do what they will with our information.